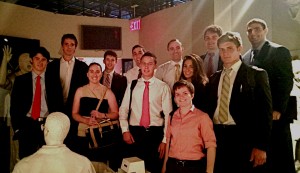 My son and stepdaughter both interned this summer. My son’s internship started a few months ago, when his employer sent him books to study. He ended up reading four books on finance and woke up early to read five newspapers before commuting on the 6:50 train to New York. His paid internship was in the financial markets.

On the other hand, my stepdaughter’s public relations internship was unpaid (yes, unpaid. This was an intriguing topic between the two of them at the dinner table). She worked every day from 9 to 6 for a firm that was energetic and interesting to say the least.

I also had an intern. Many people are put in the position of hiring their friends’ kids for the summer. I was not planning on having an intern or being placed in this position as I had been in the past. But when a kid from your alma mater seeks you out, taking an initiative to look you up, contact you and really stay on your case about an internship, you give him one.

Sure, at times he was just as bored as any intern, but I was impressed with how he adapted after I changed the entire direction of the internship. He ended up taking it upon himself to ask questions and step into an area that he had no idea would be something that would interest him, making his internship something more than I had planned.

I spent the summer teaching the interns of the hedge fund Skybridge Capital, as well as giving a keynote speech and money management lecture to a crowd of 600 people. I spent the most time with the Skybridge interns, kids from schools such as Harvard, Tufts and other top universities. They were extremely bright and easy to lecture to. We talked about their workday and what they needed to do to succeed in the workforce. We also toured the Museum of American Finance and NYMEX. I wanted to give them a firsthand view of how the trading floor had once been a thriving, crazy and exciting place and was now an empty shell of its former self.

I know that all kids in internships deal with the occasional boredom and adjusting to getting up early to commute every day. It’s not easy, especially when you’re doing it for free. While each intern worked in a different field of interest, they all learned not just what it’s like to work in the real world but how to adapt to it emotionally and professionally. They often don’t even realize how much they absorb, from the responsibility of being at work each day on time to dealing with mid to upper level management.

Some company employees are just happy to have someone get their coffee and dry cleaning, while others do want the interns to get the most of their experience. One of the most important lessons students realize is that life is not always what they think it will be and that the worst day at school can beat most days working for someone else. They also learn how being a big shot in school, on a team or in the Greek system means very little when walking through the doors of an office.

And then there is the one intern that reminds us to be careful how we treat them. Years ago in Chicago, an intern’s boss treated him terribly. One day he was ordered to get the guy’s Porsche washed. He came back and told us how he hit a pole. Someone asked what happened. He said, “I am not sure. The pole just jumped in front of the car.” Then he smiled, went upstairs and quit.

I think the real value of internships are the untold lessons. A short taste of the world as it really is. So if your son or daughter said they were bored or didn’t learn a lot, just nod and realize they learned more in the last six weeks than the past year of going to class and parties. There is very little that can teach as much as real life in the real world and they will all be smarter, wiser and enjoy school more then ever before.

And as for me, what did I learn from the interns? That it’s great to be young!

Trading Tip #5 – Never Add to a Losing Position. Except…

CNBC Guest Post: Get Ready, A Correction is Coming

People overreact when a selloff like the one happening today occurs. As a trader, I…